Held across two days, the conference was attended by school Executive teams from around the state who were keen to Innovate, Respond, Flourish. The Minister for Education, Hon. Suzanne Ellery, spoke to delegates on the opening day, as well as keynote presenters, Richard Gerver and Professor Sugata Mitra.

Professor Mitra is a TED Prize winner whose Hole in the Wall experiment inspired the book, and subsequent Oscar winning film, Slumdog Millionaire.

Conference feedback has been highly positive and Emma is to be congratulated on her commitment to furthering the professional learning of WA educators. 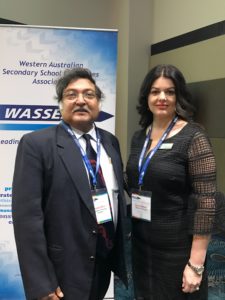