Fremantle College welcomed the Clontarf Foundation into our college in Term 2 2019. In the short time they have been a part of our college they have had a significant influence, having attracted over 56 of our male Aboriginal students to the Academy. What is even more encouraging is the fact that all of these students have dramatically improved their average school attendance.

“The Academy students have really embraced the values and culture of Clontarf, which is starting to be reflected in their school results. A significant reason for this is due to the terrific support we’ve received from the Fremantle College Principal and staff. I want to give my personal thanks to you all for being so welcoming of our staff and for being so encouraging of our students. Our combined effort is the key to giving these students the best chance at a well-rounded education and successful life post school. We have had a strong programme of activities this year that has included regular training sessions, multiple camps, excursions and community events which have built a strong base to work from in 2019. Thank you again for your support.”
– Phil Gilbert, Academy Director

Our Students Meet the Prime Minister 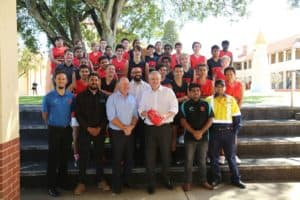 It’s not every day you have the opportunity to meet the Prime Minister. For the students from the Fremantle College Clontarf Academy however, when the opportunity did come in early October, they leapt at it. The Prime Minister the Hon. Scott Morrison, who is a long-time supporter of the Clontarf Foundation, was joined by the Member for Swan the Hon. Steve Irons for a morning training session and barbecue breakfast with Clontarf students from across the Perth metropolitan area as well as Northam. Despite being the second week of school holidays, close to 50 young men from Cecil Andrews, Northam, Swan View, Yule Brook and Fremantle Academies gathered at the beautiful grounds of the Clontarf Aboriginal College for the chance to mingle with the Prime Minister. Fremantle Academy Operations Officers Ashton Hams and Clem Michael joined the Fremantle College contingent, made up of Academy members with strong school attendance and who had shown excellent behaviour throughout the year. During breakfast, the Prime Minister praised these young men for their efforts and reinforced the importance of finishing school. Well done to the students for representing Fremantle College!

Phil was born in Mount Barker and raised on a farm in Kendenup, he attended Mount Barker Senior High School and graduated year 12 in 1986. He then moved to Perth to commence playing football for Claremont, he played 102 league games winning four premierships.

Phil also played 49 AFL games with Melbourne Football Club and the Fremantle Dockers. Phil has worked with the Clontarf Foundation for 10 years as the Director of the Albany Academy. Phil joined the Fremantle Academy at the start of term 2, 2018. Email:  phil.gilbert@education.wa.edu.au

Clem was born in East Fremantle, grew up in Coolbellup and attended North Lake Primary School and Senior High School. Clem played League Football for South Fremantle in 1997 and winning the premiership. At the end of 1997, Clem was drafted to the Fremantle Dockers where he played until 2001, notching up 46 games, unfortunately a serious knee injury ending his time at the club. Clem has worked as an AIEO, ITAS tutor in a number of Primary and Secondary Schools over the last 10 years. Clem has worked with the Clontarf Foundation for 6 years at both Cecil Andrews Academy and Clontarf Aboriginal College Academy. Clem quotes; As an Indigenous male I have a passion for mentoring and guiding young Indigenous males to help them to become proud young men.

“The Clontarf Foundation exists to improve the education, discipline, life skills, self-esteem and employment prospects of young Aboriginal men, and by doing so, equip them to participate meaningfully in society.”

Since opening its first Academy for 25 boys in 2000 the Foundation has grown to cater for over 5,600 boys in 96 schools across Western Australia, Northern Territory, Victoria, New South Wales and Queensland. The newest being our very own Fremantle College.

The Foundation believes that failure to experience achievement when young, coupled with a position of under- privilege can lead to alienation, anger and more serious consequences. As a prelude to tackling these and other issues, participants are first provided with an opportunity to succeed and in turn raise their self-esteem.

The Foundation achieves this through the medium of its Australian Rules and/or Rugby League and a variety of engagement activities in partnership with Fremantle College to cater for the specific educational needs of participants. Any Aboriginal male enrolled at the school is eligible to participate in the academy.

Our program provides an important school-engagement mechanism for many at risk students who would otherwise not attend or have low school attendance. Full time Clontarf staff, mentor and counsel students on a range of behavioural and lifestyle issues, while Fremantle College cater for their educational needs.

Using a comprehensive approach of supportive relationships, a welcoming environment, and a diverse range of activities, the students develop improved self-esteem and confidence which enables them to participate in education, employment and society in a positive way.

Academy activities are planned within the focus areas of education, leadership, employment, healthy lifestyles, Life Skills and football. In order to remain in the program, students must continue to work at school and embrace the objectives of the Foundation and the School.

Upon completing their education at Fremantle College, graduates are helped to find employment. Specialist Employment Officers are engaged to do this and provide support until graduates become comfortable with their new jobs and surroundings.

The Foundations approach has been very successful, not only in attracting young men to school and retaining them but also in having them embrace more disciplined, purposeful and healthy lifestyles.